Spousal-Marital Rape 262 PC. Spousal/Marital rape is a very straight forward crime. It is the rape of ones wife/husband. Not only does the crime fall under rape laws. It also falls under domestic violence as well. What is interesting about this crime is that yes although a man woman do agree to be in a marriage rape can still happen. Rape by nature is intercourse against a person’s will. This could be either through duress, force, or fear. Perhaps rape happened with drugs or alcohol which impedes on a person’s common sense. Or perhaps it could have happened without the person’s knowledge. The reason here could be because he/she was passed out. If a threat was used to rape someone the threat must have been believable. For example if a small woman who weighed a hundred pounds threatened her husband that is a body builder to have sex with her or else shed beat him up, it wouldn’t count as spousal/marital rape. It’s important to know that in all rape cases consent plays a crucial role. Consent is the act of agreeing to act freely and voluntarily and knows what he/she is getting into. Consent can be taken back mid-intercourse but if it continues it will count as rape. The use of birth controls such as condoms does not actually mean consent. If consent was taken back it needs to be clear and that a reasonable person would understand.

All types of rapes are felonies. That includes Spousal-Marital Rape. As a felony you can see a formal probation. up to 8 years in prison and additional 5 if you inflicted great bodily injury. If the rape was done by force,fear,or duress you could see a life in prison if this was not your first sex crime. You will also see up to a $10,000 fine and if done with force or fear will require you to register as a sex offender 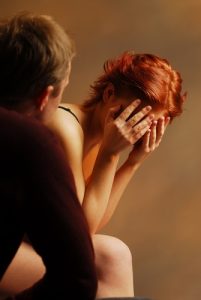 for the rest of your life.

If you or a loved one was charged with Spousal-Marital Rape, come see an attorney to know what options you have.

Corporal Injury to a Spouse or Cohabitat