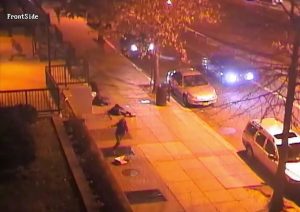 Shooting in inhabited areas. PC 246 makes it a crime to shoot at inhabited house, occupied building, or an occupied vehicle. Doing any of those will put you in prison. Ban you from owning a gun for life. And adds a strike to your record. To be guilty o this crime the prosecutor has to prove 2 facts. 1. that you shot a firearm at one of the said targets. and 2. That you did so with malicious intent. Also shooting “at” one of the said targets comes with technicalities. Shooting inside while inside a house or shooting from the inside of an attached garage does not fulfill the at requirement. However if you shot from one house into another house, then the “at” requirement is met. The word “inhabited” means that a person must mean a person lives there. However it does not mean that the person has to be there at the time of the shooting. A house, building, is inhabited until the occupants have moved or has vacated and doesn’t return. its important to note that while the garage does not count as an inhabited house, it does count as a building. You can also be charged for this offense if you aided someone in doing any of this. For example if you drive a friend that was going to shoot a house, both of you face the same charges.

Punishments for Shooting in inhabited areas

Shooting in Inhabited Areas is a straight felony. Punishable by up to a year in jail or up to 7 years in prison. However that’s if you didn’t hit anybody in the shooting. If a person was injured and suffered great bodily injury, you get an extra 25 years to life. This is due to California’s “use a gun and you’re done” law. If it as done for a street gang, then you could face an extra 10,20, life sentence. In additional to the sentence you will lose your right to bear arms. And Will add a strike to your record.

If you were charged with Shooting in Inhabited Areas then speak with an attorney. Its a serious crime that if not handled quickly, can spell disaster.

Assault with Deadly Weapon PC 245a1

Carrying a Loaded Firearm in Public