Resisting Arrest is probably best known as when someone is trying to shake off an officer that’s trying to cuff him or her. However resisting arrests covers a wider arrange of actions that counts as resistance. California defines it as simply “resisting, delaying, or obstructing a law enforcement while they are performing their duties”. Some examples of this can include trying to run to the scene of the crime. Trying to get information from people around the area to check out the crime. Or perhaps watching a suspect or talking to a suspect in custody. Examples of these types of actions can include but aren’t limited to. Struggling with an officer that’s trying to cuff you. Making faces and insults at an officer that arresting your friend. Or perhaps lying about your name when questioned. 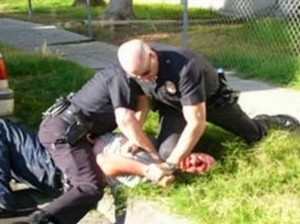 Resisting Arrest will be charged as a misdemeanor. If you were charged with resisting arrest you can see. One year in jail. And a max of a $1000 fine. A probation may be issued depending on the facts of the case.

In order to be charged with resisting arrest, you must willfully know that you did it to obstruct law enforcement. The second part is that the law enforcement themselves must have been lawful themselves. If Resisting Arrest using self-defense, it will only work if the police acted in misconduct first. If you used “self-defense” but the police acted in lawful conduct, then your defense would not work. related offense would be 69 PC obstructing or resisting executive officers. This is similar to Resisting Arrest, however it only includes cases where threats and violence were used and is the more severe version of resisting arrest.. Depending on the circumstances of the case you can be charged with either, but not both.

Have an attorney that knows police conduct  read over your resisting arrest case.