In order to know some of the laws for possessing prohibited weapons, we have to know what counts as a prohibited weapon. An air gauge knife, ammunition that uses a fléchette dart. A ballistic knife or a belt buckle knife. Bullets that have an explosive ingredient. A camouflaging firearm container (ie. suitcase that fits a gun). Cane guns, or cane swords. Concealable daggers, explosives agent (other than fixed ammunition). Firearms that cannot be immediately identified as a firearm (ie. a gun ring). Large capacity magazines. A billy, which is a a weapon that consists of a leaded cane or something like it. Metal knuckles. Hand grenades or replicas unless it is permanently inert. A burst trigger activator. Nunchucks. Short barrel rifles/shotguns. Shurikens. Wallet guns .An undetectable firearm such as a plastic pistol. And zip guns.  In essence many weapons disguised as something else that’s not a weapon is illegal. In California it is illegal to make, import, keep to sell, give, lend, or even have any of these kind of weapons. To be charged with possessing or selling these weapons the prosecutor has to prove certain elements. If it is a firearm then it has to be one of the prohibited types. Conventional guns are legal for adults to own. The only exception to the adults are felons, addicts to narcotics, people who brandished a weapon more than once, convicted certain misdemeanors, those with mental illness, and minors. Even if the gun itself is inoperable it can still be charged. You knowingly carried it on is a second factor. That means you knew it was a weapon and can be used as one. If you were unaware you can’t be charged. The real ability of a weapon is important as well. Although anything can be used as a weapon, its the real capability that can make or break it. A candlestick although can be used as a weapon, is not generally capable for fighting. A baseball bat however can. Some exceptions to prohibited weapons include martial art schools, use in movies, as an antique, approval by Department of Justice 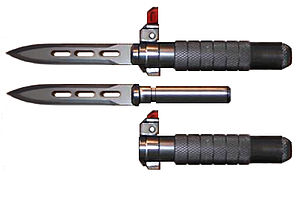 It can be charged as either a misdemeanor or a felony. It depends on the facts of the case and your criminal history. For a fist offense for a hand grenade it is an infraction. That comes with only a $250 fine. However for misdemeanor prohibited weapons you can see an informal probation, a year in jail, and up to a $1,000 fine. As a felony you will receive a formal probation with a year in jail, or up to 3 years in prison, and/or up to a $10,000 fine and loss of the weapon.

If you were charged with prohibited weapon laws, speak to an attorney. Its important to have an attorney look over a case for you.