H&S 11350 – Possession of a Controlled Substance

Possession of a Controlled Substance

Is possession of a controlled substance a felony?

Not necessarily. Most possession charges are misdeameanor charges. The state of California is more interested in rehabilitation than punishing you. It’s within the states interest to get you service that would benefit you if you have a drug problem. However, if you are found with a substantial amount of drugs that would indicate you are in the business of distribution and supplying then you can be charged with a felony.  H&S 11350 – Possession of a Controlled Substance can be either a felony or misdemeanor.

The consequence of the offense will vary depending on a number of factors. Some of these factors are the amount of the controlled substance, the class of the substance, whether there have been previous offenses and the county you are in.

The circumstance of how you got caught will also dictate how you will be charged. For example, whether you had only enough for a night out or whther you were holding on to the Ecstasy for purpose of distributing it.

“H&S 11350 applies to anyone who has a narcotic drug classified as a controlled substance listed in Section 11054 (b) or (c), or Paragraph (f)1, Paragraph(f) Section (14), (15), or (20);  or Section 11055 (b) or (c); or Section 11056(h), or any controlled substance that is a narcotic drug in Schedule III, IV, or V of the Health and Safety Code without a prescription from a doctor, dentist, podiatrist (foot doctor), or veterinarian who is licensed to practice in California can be punished by confinement in the state prison.” 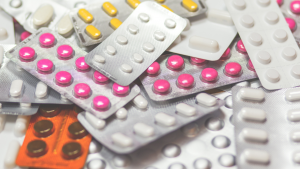 Can you be prosecuted for possession of prescription drugs not prescribed to you?

What are the Punishments for a Possession of a Controlled Substance Charge?

Can you get jail time for possession of drugs in california

Yes. Jail time is possible with a possession of a controlled substance charge. People in possession of a controlled substance can be punished up to a year in state prison or up to a year in the county jail. A judge may also impose a fine of $70.00, based on the defendant’s ability to pay.  However, we need to go back and keep in mind that California has a bigger interest in having get help than warehousing people in jails. Some of these alternatives are below.

Possession of a Controlled Substance Misdemeanor

Fines for a possession of a controlled substance misdemeanor

If the defendant cannot pay, the judge may order the defendant to do all community service instead of paying a fine. (California Health and Safety Code Sections 11054, 11055, and 11056 are included in a separate document, and they have the lists of controlled substances referred to above).However, unlike DUI cases, the fines in drug cases are not substantial and will not present a problem

How Do you Fight a Possession of a Controlled Substance Charge?

Fighting it on the Procedural Grounds

These are otherwise known as the 4th, 5th, and 6th amendments.

Within the limits of the constitution, means that there hurdles a police officer must jump thru and properly for the purpose of an arrest on an H&S 11350 case. For example, an officer must clear the 4th amendment hurdle first. The 4th amendment is a prohibition from unreasonable search and seizure. How much intrusion to a person and whether or not that the intrusion is justified has been commented on by the courts. Failure of the officer to comply with these standards will result in evidence not being admissible. If this happens then the case will be dismissed.

1) An officer may suspect a person has drugs on him or herself because of the way he looks and the person may have drugs on him or her making the officer’s suspicion correct. However, law enforcement will need something more than a hunch to justify a police contact. They can’t just say a person looks nervous.

2) An officer suspects a person has drugs and pulls them over consistent with Possession of a Controlled Substance H&S 11350.  However, upon pulling the person over, the officer immediately orders him or her to sit cross leg and put his or her hands behind his or her back then starts questioning the person without reading him or her; rights which results in incriminating statements. This will result a violation of the persons Miranda rights. However, officers are smart and will conduct their investigation in a way that complies with Miranda and try illicit statements prior to a functional arrest.  It is up to the court process to uncover the truth.

3) During a Possession of a Controlled Substance H&S 11350 investigation, a police officer will interrogate a person that they strongly suspect was involved in a hit and run. The person has asserted his or her rights to counsel and told the police that he does not want to talk and wants his attorney there. Under these situations, the police must not question the person anymore. Failure to comply with this and more questionings which results in a confession or damning statements will only result in the fruits of it being suppressed and not being able to be used in court.

Search and Seizure – The state must respect your reasonable expectation of privacy.

Procedureally there are many things a police officer must do get to the drugs. Police Officers can’t go off hunches. They must follow the law when it comes to search and seizure. If an officer skips a step, this may result in a violation of your constitutional rights. Because of this a possession of a controlled substance case is very complicated. The timing of when you were pulled over and asked to consent to a search is crucial. A mistake in procedure can mean the difference between a dismissal for a violation of your rights. With body cameras as evidence, this happens even more these days because officer’s reports can be contradicted by the video on their body.

Areas that are protected from unreasonable searches

H&S 11350 – Possession of a Controlled Substance cases are not open and shut cases.  They are open to attack on both a substantive and procedural ground.

Preventing a Possession Case from turning into a Sales Case

Felony possession of a controlled substance

On a substantive ground, many of today’s possession of controlled substance cases H&S 11350 have turned into possession for purpose of sales cases.  Possession of sales is a popular charge by law enforcement because of prop 47.  Law enforcement has not appreciated Prop 47 and as a result has started charging situations that would have been just possession as sales cases. For example, a person with an 8 ball would be charged normally be arrestd and charged as a possession case, however it is now charged as a sales case. This has resulted in bail and other complications for people who are accused of sales. It has increased the jail population and made it difficult for people to bail out and fight their cases.

The Costco Buyer is at Risk of Being a Drug Dealer

For example, a person may want to buy more drugs such as a few balls or an ounce of meth for personal consumption. In addition to this as a diligent buy and investment on their dollar they have decided to bring a scale with them, you can see where this is going.

Other Options for Resolving a Case

Is This a First Time Offense Possession Controlled Substance Offense?

This is especially for  the case for people who have gotten mixed up in the wrong crowd.  In situations like this it is best to go after a diversion class where our client will agree to do classes and stay out of trouble. After the recovery classes, the prosecution will dismiss the cases.

What if You have multiple Time Offense Possession Controlled Substance Offense?

However, recovery is a tough road and not everyone can pull this off. Recovery in H&S 11350 cases often involves multiple instances of relapses. This is common among people who use methamphetamine and heavily addictive drugs like heroin.

However, even after falling out of programs it is still possible to use the laws to get additional chances and ultimately a dismissal. Recovery is journey and not just done with one trip. Society is aware of this and the courts will have put together collaboration teams to help people out who are committed to recovery.

A person being charged with H&S 11350 should consult with his or her attorney about the options that are available.