The Hand Pat in DUI 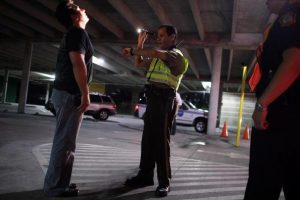 The Hand Pat in DUI is an unofficial field sobriety test (FST). However this does not stop law enforcement from using it. In the Hand Pat test, the officer wants you to place your hands so they’re on top of each other. You would then lift your top hand, and turn it 180 degrees while you pat the back of the hand and your palm while it remains stationary.During all of this you are supposed to count one two for each pat. As said before, unlike the horizontal gaze nystagmus test, walk and run test, and one leg stand test. The Hand pat is not an official field sobriety test, meaning its not approved by the National Highway Transportation Safety Administration. The reason why the test isn’t official is because there are statistical evidence between the official tests and being impaired. This means that the hand pat test is not a reliable way to test for impairment.

The main reasons why officers do unofficial tests such as the hand pat test is to test whether the subject can follow instructions. Examples would be starting to soon, or just not following instructions.

Flaws of the Hand Pat Test

The problems with the hand pet test is that it cannot reliably say that you are impaired. There are so many flaws since the procedure can differ from each law enforcer. The main ones are just flaws that can happen between people. Example is a language barrier. If you cannot understand each other there is no way to do a test correctly. The person being tested may have some physical injury that prevents them from using proper movement. Lack of a professional also puts the subject in a disadvantage. Distractions are also everywhere so doing the test on the road can easily distract a person. Those are just some of the problems with the test.

If you feel that an officer used a hand pat test against you and put you at a disadvantage, consult with an attorney.