Gross Vehicular Manslaughter While Intoxicated is a serious crime that affects not only your life, but everyone related to anyone involved in this case. In order to be charged with Gross Vehicular Manslaughter While Intoxicated the prosecutor has to prove 4 things. 1. That you drove under the influence of drugs and/or alcohol while having a blood alcohol level 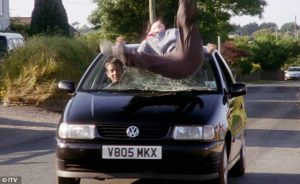 of 0.08 or higher (or if you are under 21 0.05). 2. While driving under the influence you committed a misdemeanor or infraction that could caused death. 3. You committed the act with gross negligence. and 4. Your gross negligence caused someone else’s death. The legal definition of gross negligence is 1.you acted in a reckless way that creates a high risk of death or bodily injury. AND 2. a reasonable person would have known that acting in that way would create said risk. In other words gross negligence is acting without regard for human life. Its important to know that although you are under the influence of drugs and alcohol and even violate a traffic law does not amount to gross negligence. Its up to a case by case basis since the people will consider every possibility such as your conduct, the way you drove, level of intoxication etc. However if such an example such as an unexpected emergency came up not caused by your negligence. You are responsible to use the same amount of care and judgement an ordinary person would use in the same situation. This means that if you have to get to a hospital quickly, and need to speed up. You would probably only go at the max speed limit or a little above. However you probably would not speed up to 20 miles over.

Gross Vehicular Manslaughter While Intoxicated is a serious crime and affects everyone around you. If you or someone you know was charged with this, have an attorney read over your case. It’s important that you have proper representation and consult with an attorney who is familiar with Orange County DUIs because having alcohol or drugs in your system will increase penalties.