What are the consequences? 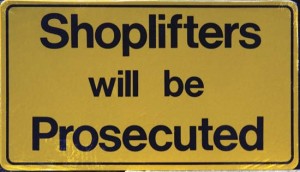 It’s important to handle your shoplifting charge appropriately. Handling it the wrong way can result in a criminal record.

Many times are people are charged with more than one shoplifting charges. This happens with people who are chronic shoplifters. They would leave their things(loot)  inside the cars and go to another store and shoplift more. This happens a lot with females and make up for some reason. In my experience I have seen people who have shoplifted and leave the stuff  inside the car and go back inside to get more stuff. When this happens one of two things can happen. 1) They get away with everything and they double up on their loot and avoid the Shoplifting Charges. 2) They get caught and have no way to explain the rest of the materials inside the car and can be exposed for the thefts for the other items as well.

It’s important to talk to a criminal defense attorney in your area and who is familiar with the local courts. This gives you an advantage when dealing with your Shoplifting Charges and can mean the difference between it being blown into a grand theft, 2nd degree burglary, shoplifting or even a dismissal.

Misdemeanor and Infractions – What are the differences?

How to find a Criminal Defense Attorney

Getting your Minutes and Docket Report