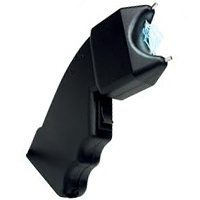 or less lethal weapon. 2. You did so willingly. 3. When you acted, you were aware that a reasonable person person would understand what would happen if you were to use the tool on someone else. 4. When you acted, you had the ability to apply force with a stun gun or less lethal weapon. 5. You did not act in self defense or defend another person.  A stun gun is a tool that is used as an offensive or defensive weapon used to immobilize someone by inflicting an electrical charge on them. A less lethal weapon is a tool that is used to incapacitate, immobile, or stun a person through non-lethal impairment of physical condition, function or senses. These can include physical pain or discomfort. Although you may think that a long term injury can be caused by mainly lethal weapon such as deep wounds or stitches. A non lethal weapon can inflict lasting or permanent physical pain, discomfort, or disability. Application of force and apply force means to touch in a harmful or offensive way. The slightest touch can be enough if it is done in a rude or angry fashion. Indirect touching also falls under this category. So this means touching through clothes is enough. The other type of indirect touching includes the use or means through something/someone else. These touches don’t have to even cause pain or injury of any kind.

If you or someone you know was charged with Assault with Stun Gun or Less Lethal Weapon, its important to know that you need to get in touch with an attorney and know you can fight this case.