In the court system when a person is picked up for a Prostitution Ticket in California they are called Johns. This can happen a number of ways.

1)Massages. There are police stings out there masquerading as massage parlors. In addition to that, there are many police officers on Craigslist providing services. These services are services that are offering massages for very cheap.  There is a joke in the criminal defense circle that there are more cops on Craigslist then there are regular people. The bottom line is that it is very easy to pick up a Prostitution Ticket in California by using Craigslist. 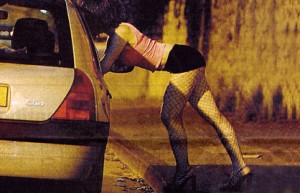 Prostitution is misdemeanor in California

2)Picking up a girl on the street.

These are one of the more easy ways to a Prostitution Ticket in California. The trouble comes when a person gets to a spot and starts taking care of business as opposed to when the actual transaction will occur. For example, John will pick up a girl on the corner of Beach and Ball and they drive to a corner. John and the girl already took care of the business transaction but before they start doing the deed, a police officer will show up and start citing them for being around the park at night. The officer will suspect the girl because he has run into her before and start illiciting incriminating information from her. If this happens then it will make the case against John and John will end up getting a Prostitution Ticket in California.