Category Archives for DMV and License

The most important thing is to find out why your license was suspended by DMV.   These can be for a number of things.   These  involve  you not paying a court fine when it is due.

It’s important to show up to court for your case. Courts  and the DMV do not like it when you ignore them and by ignoring them you are subjecting yourself to increase fines and penalties. You need to show up to court when on your court date.  Failure to do so can result in a California License Suspension. This means the court will suspend your license and you will not be allowed to drive. If this happens and you are caught driving then you will be subjected to a  driving on a suspended license charge. A driving on a suspended license charge will subject you to probation, jail time and fines. 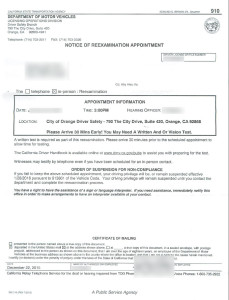 DMV will suspend a person if they are found not fit for driving.

Other times, the California License Suspension may be related to a person’s health and fitness to drive.  This happens when a person is ill or has some sort of medical condition which makes them a danger on the road.  Some things that make a person dangerous on the road include that of suffering seizures or being legally blind.  In these cases a person will be called in for a fitness exam where they will be given an eye test and from there given a series of other test which will help and hearing officer determine whether or not their condition hampers them and makes them a dangerous individual on the road.  California License Suspension can be handed out for physical as well as mental conditions. For example, a person can be unfit to drive even if they have perfect vision if they are found to be mentally unstable for the purpose of driving.

Most License Suspension in California is a result of blowing off a traffic ticket.

Facts About Your Suspended License

There are many things that can go wrong when you get a California License Suspension. The most important thing is to find out why your license was suspended by DMV.   These can be for a number of things.   For example, if you fall behind on child support then you can get a  License Suspension by DMV. The state  legislatures  have made up several ways to make dads pay overdue child support. There are also other ways your license can be suspended as well. These  involve  you not paying a court fine when it is due.

The main point if you NEED to show up to court or have an attorney show up on your behalf. By not showing up to court you are putting your self up for more charges. These charges include a failure to appear and additional civil assessments.

In addition to this, the failure to appear is also a misdemeanor. A misdemeanor will affect your criminal record. It’s important that you take care of this the correct way. A California License Suspension will involve a hold on your license. This hold on your license will make it illegal for you to drive. If you are caught driving within this period then you are subject to jail time and fines. You are looking at probation and your car being impounded.

Getting your license suspended

California License Suspension happens all the time.  There are a number of reasons why the court would put a hold on a person’s driver’s license. Many times it is because of a DUI   or a person has too many points.   A person may rack up many points for vehicle violations.   For example a person can accumulate up to 4 points in traffic tickets over a period of time before a California License Suspension.   Other reasons why a person is suspended is because the lack of child support. This happens a lot when a person forgets to pay child support. One other one is a failure to pay fines.    Finally one of the main reasons why a person’s California Driver’s license is Suspended License in California    is because he or she simply forgot to appear in court. Most License Suspension in California happens because people blow off their traffic ticket.

The most common ways people get a California License Suspension is through  failure to appear in court. What usually happens in these cases is that after a traffic ticket, people just tend to forget. Since its so common a lot of people get it, and typically its not in your favor. People have other things to do, and having to appear in court for a traffic ticket is just impossible sometimes. You can also keep your California License Suspension going if you do not pay the fine that came along with the failure to appear in court.

Either way, you decide to deal with it your own way by throwing it away. It works with bills right? Or perhaps you just lost the ticket and you had no time to go back to court. You didn’t want to wait in line for 45 minutes to see a court clerk because you are out of sick and vacation days than you just decided to move. You  decided  yourself that he was unfair and you  decide to  throw away the ticket. This will result in a License Suspension by DMV. Another variation of this scenario involves a a person delaying a ticket out for a very long time then forgetting about it. This happens a lot in Los Angeles County. A person can delay their ticket out for almost a year. If a person person delays it out for a year then the longer a person delays it then more likely a person will forget about the ticket. When this happens it is treated the same as a failure to appear.This will result in you missing your court date. When this happens a number of things will happen. Your license will get suspended, there will be a civil  assessment  on you, even if you move out of state the license hold will still stay on your record, you will have new charges against you and there will be warrant  out for your arrest along with a  License Suspension in California.

Other typical suspensions can come from no insurance (or proof of it), failure to pay child support. And caught driving when physically or mentally unable to. A good example is DUI. And lastly it can incur from driving points on your history. If you get 4 points in a year, then your license can be suspended for 6 months and put you on probation. In all these cases the police will give you a suspended license and will take your driver’s license.

When you fail to appear for a ticket there are several things that can happen in addition to a License Suspension by DMV.

In addition to the License Suspension in California.  The courts do not like you skipping out on your tickets. It is one of the ways it raises money. It will get you in one way or the other. The warrant tells law enforcement that there is an arrest warrant out for you. This means that you can get arrested at any time there is law  enforcement  contact. This is in the broadest sense. Even if you did not break a law you will still be exposed. For example, if you were in a car that and a passenger but the car got rear ended by no fault of the driver and police came by than the police can take you in. Bottom line is that you do not need to do anything new to get arrested.   A warrant alone is enough.

When people do not show up to court, they will receive a failure to appear notice

The first is that your ticket will be  referred  to GC Services. GC services will go after you for the full amount of the ticket. In  other words  they will go after the  maximum  amount. For example, if the court was asking for 400.00 then GC  services  will come asking for $1400.   In addition to this, the people who work at GC services are very agressive at getting you to pay over the phone.   They will not tell you that there other options to handling things.   You need an attorney by your side who can filter out the BS and who will look out for your best interest. You will also be facing additional charges of a failure to appear which is a  misdemeanor.

In fact, if a person misses out on their court date, then the court will usually add an additional charge of  failure  to appear.   This is a  misdemeanor in itself and carries jail time and fines of up to a 1000 dollars. In addition to this, the court will also add many extra fees.   Some of these fees are labeled civil  assessment.   These  civil  assessments  are hefty fines in itself. They can be anywhere from 300-500 dollars.

This does not come out well for the person who missed their court date. First their license gets Suspended License in California.  In addition, they are now facing  misdemeanor  charges as opposed to just infractions and finally the fines have more than doubled.   This type of mess takes a substantial time to clean up.