Arson Laws PC 451/452. The legal definition of (malicious) arson is willfully and/or maliciously setting a land/property/building on fire. However the second arson law is unlawfully causing a fire, also known as reckless burning/arson. The legal definition  is Recklessly setting fire to a land/property/building is a crime. The main difference between the two crimes is the state of mind of the culprit. Malicious arson counts burning something is considered arson, even if its just a small part of it. If you attempted to start a fire on someone’s lawn, but ran out of matches after failing. It is still considered a crime and falls under malicious arson. Overall malicious arson is intending to do something unlawfully, or harming someone or their property with fire. Otherwise if you did not mean to cause harm to anyone then reckless burning is often the go-to. Reckless burning is setting fire to structure/land/property well, recklessly. Reckless means that you were aware of your actions that carries a large risk of causing a fire. You ignored that risk. A normal person would not have committed to the action knowing the risk. This is not the same as an accident. It is the complete disregard of safety. Actions such as throwing a cigarette into a bush is reckless.

Arson punishments can vary. If you did it maliciously. What you burned. If anyone else was injured. And criminal history. They all play a part in the sentence. Any arson offense may make you do a psychological evaluation to aid the judge in deciding jail or prison time. Malicious arson is a felony. Up to 3 years in prison if it was personal property. 6 if it was a structure or forest land. 8 if it was a inhabited property that actually burned. 9 if it caused any injuries. All of those also carry a fine of up to $10,000 and a strike 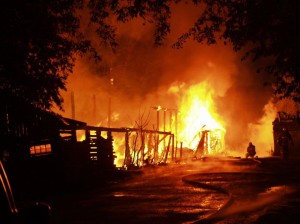 . Reckless arson is a misdemeanor. You could see 6 months in jail and up to a $1,000 fine. However if the property was forestland, or caused injuries it could become a felony. as a misdemeanor it could be up to a year in jail, as a felony up to 6 in prison.

If you were charged for arson, speak to an attorney. Arson is a serious crime that can spiral out of control if its not handled.