Hit and Run is usually a small crime, however one there is bodily injury on either drivers side then hit and run can escalate to a bigger issue. Without injuries a hit and run is treated as a misdemeanor, however once bodily injuries are introduced then the situation can become either a misdemeanor or a felony. Firstly, to prove that you were involved in a hit and run, they must prove the facts that you were involved in the accident, you knew there was an accident, knew of injury or death, and that you purposely ignored the accident itself at the time of the scene. related offenses that can correlate with Hit and Run can include DUI, and vehicular manslaughter 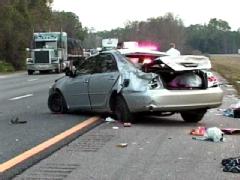 Punishments for Hit and Run

Defenses against Hit and Run

If someone has stolen your car prior to a hit and run then you can claim that it was not you driving the vehicle. This will only work if you filed another police report that you had your car stolen prior to the hit and run incident.

Evidence that shows you had to leave the scene of the accident due to a dangerous situation in which you could not leave information can constitute as a defense as well.

Also if you were the only person injured in the accident, then Vehicle Code 20001 does not apply.

Having an attorney able to sort the situation out will reduce the charges of a hit and run.

License Suspension – 2 Ways to Lift It